Everything is perceived in relative terms. That particularly applies not only to the perception of sound but also to building real high performance audio equipment. Apart from a vast choice of materials and components- each of them having a sound signature when applied in a circuit of of a product, one also faces a dilemma of how to implement those components. At this occasion, it is paramount to understand that it is virtually impossible to build audio equipment on a consistent basis without deviation, even in small series production because of almost infinite number of variations possible of how a product could be assembled. That notion renders the value of so called expert reviews to almost zero value! Let us illustrate the issue with 2 extreme case scenarios:

On the one hand, there is a possibility that one could build 2 identically sounding but yet different products e.g. DACs with 2 completely different circuit topologies and they could sound alike if one does not chooses materials and components carefully. Paradoxically, one could build 2 identical DACs made out of absolutely identical parts and both DACs will sound significantly different from each other. In the first case scenario, the cause of the perception of similarity is the lack of revelation of chosen components in a complex circuit design. The system that does not revel differences is called homogenizing system (it is an issue of homogeneity, more on it later). The latter case scenario is characterized by the infinite number of variations of how an audio product could be assembled. The rationale behind that despite known sound character of passive components they do tend to sound differently still when their position and direction are ignored.

Why is there such a deviation one may ask? There are some exogenous factors that we cannot control for such as deviations in the production, age, storage conditions, handling etc. Firstly all passive components underlie variations and their sonic character deviates even in series production. The other aspect is the aging of the materials. Aged materials simply sound differently relative to the freshly produced ones. Moreover, all passive components interact with each other resulting in different various never ending transformations especially during the initial run in period or almost forever as with some components such as Black Gate capacitors. Sometimes one get the feeling that there is some sort of life inside the equipment as one day one does not recognize their sound anymore.

All those above mentioned aspects are exogenous to us and are almost impossible to control for. What we can do nevertheless is determine which passive components to use and how to implement them in a circuit, so that they complement each other (as opposed to make each other worse off) and determine the direction and position at which each of the components sounds better (best).

There is a simple experiment that anybody could do at home. Take one interconnect and connect your digital transport to a DAC in one way and listen carefully to a song. Then disconnect and reconnect the same interconnect in the opposite direction. Listen carefully to the same song and repeat the procedure a couple of times if in doubt preferably with another person to see whether you findings match. If your system is revealing enough (not homogenising), you will hear that one direction sounds different from another. If one listens carefully, one direction will always sound a little bit fuller with emphasis towards bass and more effortless and the other direction will tend to sound thinner & leaner in the mid, with emphasis towards treble and have a more congested- less effortless presentation. The direction that sounds better to you is the right one. The same principle applies to all passive components be it resistors, conductors, capacitors (non polarized ones) and chokes. The choice of direction of all passive components has a cumulative effect, which in the end is responsible for diversity in sound and either makes or breaks the sound of your system.

A complex circuit design compensates sonically for shortcomings of its implementation. If there is a lot of unnecessary complexity in a circuit design, i.e. large quantity of low quality materials & components with many corrective measures such as negative feedback loops, then the most likely outcome is a homogenised (everything sound the same) sound. Homogenesation in audio reproduction as much as compression in recording kills music. It makes well and badly recorded music sound alike, boring and dead. Further reading material can be found here.

We, on the other hand, employ only the most elegant circuits design, where a wrong choice of a single component or material may not only lead to a sub-optimal sound but also to a potentially disastrous outcome. Therefore, when we design and assemble a SW1X product nothing is really left to chance. Nothing was put randomly into the circuit as every passive component was voiced separately and underwent voicing in the final circuit before a product is assembled and delivered to a customer. After all it is the sound of a complete SW1X Audio Design™ product not just for the sum of its parts. 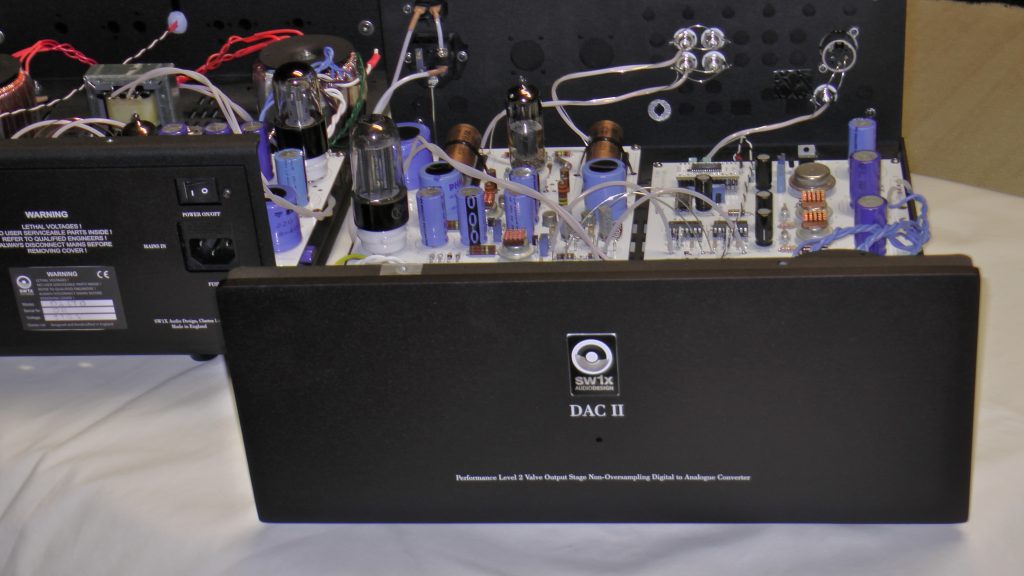 Some Reflections on Decadence of Audio