The quality of computer power supply is of negligible importance! Or is it really?

Well designed linear power supplies with high quality audio material are crucial everywhere but switched mode power supply with cheap low quality parts in your computer is not important at all?

It may sound weird to some people however we cannot stress enough that the quality of the power supply is detrimental to the sound. Especially, the quality of the power supply of a music server (speak computer) is even more crucial than most people can imagine. That is because it is located right at the very beginning of the signal chain of an audio system. Why many people think that a computer and its power supply in particular are of negligible importance despite acknowledging its importance anywhere else remains a phenomenon.

However, if one thinks in line with following principle: If something is removed from the beginning – it can never be restored back at the later stage similar to the principle of “Garbage in- garbage out”, then it becomes evident that for example if the power supply of the computer does not have enough thickness or not enough bass in the mid bass area nothing (cables, DAC, amps and speakers) will be able to bring it back at the later stage. That is why a computer power supply is the most crucial and yet the most neglected aspect of a modern audio system. That is also one of the reasons as why many computer transport based systems sound so thin, synthetic and noisy relative to the older CD player transports (from late 80s and early 90s) now days. We mentioned it before here: https://sw1xad.co.uk/digital-transports/

Not all power supplies are created equally– if one decided to upgrade a power supply of a computer with a third party power supply one most likely will hear some sort of difference but may also experience a disappointment. That is not going to be very surprising as we have not seen many manufacturers out there to take the aspects of sound quality that we promote seriously. Most of the after market power supplies we have seen on Ebay for example have one flaw or another in their design or implementation. Many people will be surprised to hear this but every part in all those power supplies contributes to the sound. If something was left to chance in those power supplies, the sound will manifest itself accordingly as a result.

Every passive and active component inside our power supplies has been voiced in our amplifiers before even considering it to be part of the SW1X PSU I setup- so we pretty much know how each capacitor, conductor or a diode sounds before we combine them in our power supplies. Every passive and active component has a specific sound signature. That sound signature manifests itself to a different extent and is quite audible wherever we would place them in audio system be it a power supply of a hard drive or an amplifier. Interaction between various passive and active components is a real art. Sometimes we get the sound right from the first attempt but most of the times the result is defined by trial and error principle as some combinations work great in one application and do not work in others. In any case we strive to use a components with least sonic deficiencies. If that is not feasible that we use the complementary principle (more about it to follow in another post).

The good news is that we addressed those issues by designing the SW1X PSU I power supply (https://sw1xad.co.uk/product/sw1x-psu-1/) with the finest materials and tuning it by using vintage Marantz and Philips CD players based on the CDM1 mechanism as our reference. We have been fine tuning the sound of PSU I in order to preserve maximum amount of dynamics and bass fullness as found in older CD player with CDM1 pick up mechanisms. The best results are achieved when the PSU I power supply is fully equipped with Black Gate capacitors. Unfortunately, that is not viable option for a series product as relatively large capacitance reservoir is required (at least of 20,000 uF) and those caps are neither freely available nor are affordable to many. Fortunately we found a combination of capacitors that reminds me of the Black Gate capacitor sound (Elna Silmics/Cerafines, AN Kaisei and Nichicon KG series were discarded because of their flaws in sound). We achieved a sound signature that is almost indistinguishable from those classic CD player master pieces plus having more analogue liquidity in the sound. Those people who are fortunate to own a piece of those finest machines know very well what we are talking about. Those who do not, should at least give a good listen to those players and compare them to a computer (music server) based system to understand where we are coming from. 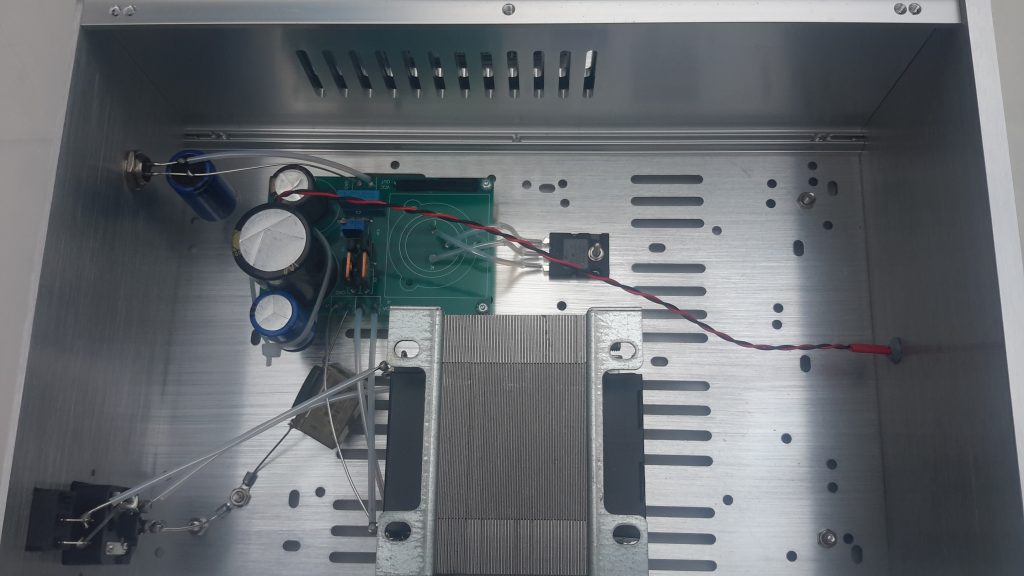